My Journey back to Montreal 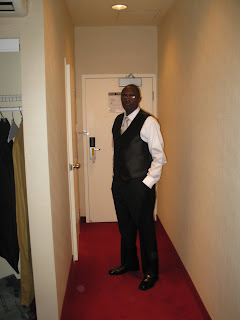 What a month of travel! This has been my schedule for the last three weeks: Three days in New York, one day in Niagara Falls the following week, and three days in Montreal last week. In a few weeks I will be returning to New York. The trip is already booked . My manager at work told me that if I keep living the life I am living now, there will be no space for a wife (I am hoping to meet my future wife on the road lol).

Talking about marriage, I was in Montreal performing double duty in a wedding (as the best man and the MC). I guess it is the next step before my own wedding, don't you think? Johnny, my best friend was getting married to another best friend of mine (I think they were made for each another. They are both my best friends). Johnny is lucky to have her as his wife. She is an amazing lady. I know she is lucky to have Johnny in her life too. It was both an emotional and great event. I was there when the relationship started and I was there to witness the beginning of the next phase of their journey.

As I mentioned, before my trip to Montreal, I was on the road for long periods of time. I had about an average of four hours of sleep per day. On Friday, I finished what I was working on around 1AM, and then I went to my friend's house in the East end of the city so that we could travel together the next morning. I went to sleep around 2.30 AM, and I was ready to hit the road at 6.30 in the morning. By the time I got into the car, I was done. All I needed was sleep (and I can sleep anywhere). I was traveling with two very good friends of mine (and I was not the one driving. Lucky me). One of them got this bright idea of bringing a pillow (whoever invented this item should get a Nobel Prize).

We chatted for a while, and then I was gone. Maybe I snored, I don't know. All I know is that I slept like a baby. And then something happened. I don't know if I was dreaming or not, but I started hearing some music. It was beautiful music. No, I was not dreaming. It was real music. I woke up on “Hotel California” by the Eagles. That is my favorite band of all times. I started singing (I know almost all Eagles' songs). The next thing I realized was that I was no longer tired. I was alive! These guys can really sing. I am glad my friend (the one with the pillow idea) was playing this CD.

With all the week-end festivities, I was exhausted by the time we hit the road on our way back to Toronto. But I didn't even think about sleeping in the car. I was still with my two friends, and we added Nicolas and Diego, the two DJ's. What a great delight! There were plenty of jokes, and then came the music, the Eagles of course, and we ended up with Bob Marley. Now all the five of us were singing. Was I ever tired? I don't think so.

It's funny how a little thing like music can change my mood and make me forget that I am exhausted. You know what I learned in the process? It's really about what I am focusing on. When I thought about me being tired, that was all I experienced: more tiredness. But once the music became my focus I no longer felt tired. I was alive!

Let's think about our lives for a moment. Good things and bad things happen to us all the time. What we choose to focus on makes all the difference. I know we can find good things in all that has happened to us. Once we make a decision to focus on the good stuff, that is all we will see. Isn't that great? It is a simple but effective decision. Let's try to see the positive side in all things. Next time you feel tired, just play some good music and you will be fine (I hope it will be the Eagles). But don't forget to sleep as well. It might help (it has been my main activity the last two days).

Moral of the story? Do you want to feel alive? Just listen to your favorite music and you will later have a good sleep. Hope it won't be in your office.

December 18, 2012
Our baby is now six months old. Time really flies. It has been a real joy to spend time with her and see her grow daily. I have received a number of positive comments about my last blog. I am glad you liked it. Let go and let God is a principle that I am learning to embrace. I have read about it a number of times, and I thought I was doing it, but I don't think I had totally released control until recently. How did it happen? So many things happened at the same time that led me realize that I had to let it go. One of them is the experience of my good friend Emmanuel Lopez a.k.a Motivatorman. About a year ago, I met Emmanuel just to catch up after my summer in Africa. Emmanuel and I have been friends since 2005, and ever since we made a tradition to meet regularly to talk about...life. As we were talking, he shared with me that he was going through one of the toughest moments of his life. From our previous conversations, I knew things were not easy for him, but he al
4 comments
Read more