My Journey to the top 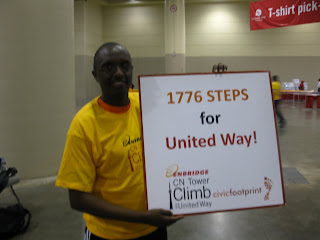 I just met an amazing person. This man is almost 76 years old and his name is Jack. He is such a funny character and above all he is an incredible performer. He climbed the CN Tour in less than 33 minutes and 23 seconds. Why do I mention this specific time? Simply because that was the time it took me to climb the Tower (in other words, Jack was faster than me!!!). This thing is HUGE. It’s 1776 steps, over 150 floors. What a challenge!

This is my forth time climbing the Tower as a fund raising event for the United Way. For the second year I was the team captain (I guess I was not chosen based on performance). This year was the year of all the records. We had a record breaking 22 members on the team, we raised over $2000 (for the first time) and the fastest member of our team made it to the top in 15 minutes and 6 seconds (another team record, obviously not my record). To top it all off, we had Jack as a team member, 76 years old! We thought he was the oldest guy in the entire event until he met an 83 year old man at the top of the tower. That was incredible. Jack’s secret? In his own words:”It was nice seeing all these young ladies passing me while I was climbing. But please don’t tell my wife” (I hope his wife is not a fan of my blog).

After the climb we took pictures and had fun together. As we got close to end the day, I took a moment to chat with Jack. He said the last time he climbed the CN Tower was 20 years ago. I asked him if he exercises a lot, and I was stunned to learn that him and his 73 year old wife walk an average of 3 hours a day. I learned also that Jack and his wife are vegetarians. Right then I had plans to go to Swiss Chalet (my favorite restaurant) for my usual quarter chicken dinner with fries with a Pepsi (and Ceasar salad on the side). Then I changed my mind.

As I mentioned, we had new members on our team and many of them were climbing the Tower for the first time. We met early in the morning, and I could read both excitement and a little bit of fear on some of the faces. Were they up to the challenge? Were they going to make it? For others, it was about breaking the records. For me it was about....going to Swiss Chalet afterwards.

Once at the top, the facial expressions changed. It was all about excitement. We all made it. Some of our family members were there as well (a trip all the way to the top by elevator. How lucky!!). It was a moment of celebration. Jack was in heaven (literary speaking as we were all in high altitudes). When I asked Jack about his experience, he just said:” It’s all about doing what I love to do. If it was not this fun, I wouldn’t do it.” I thought I was hearing Michael Jordan in his peak years.

Many hours later, as I am writing this blog, I can’t stop thinking about Jack’s comment:” it is all about doing what I love to do. If it was not this fun, I wouldn’t do it”. How many of us really think like this? Do we all really love what we do? Are we really having fun doing what we are doing? If the answer is no, then we should think it over and find our passions. It’s a life worth living. Trust me, the expression of Jack’s face said it all. He is alive as ever. And he has plans as well. He wants to speak about living healthy and long. Why not. He is a living example of what he wants to speak about. Today, I was the first member of his audience and he did good. Do you want proof? Well I skipped going to Swiss Chalet.

Moral of the story? Do you want to live long and healthy? Go and climb the CN Tower and you won’t go to your favorite restaurant.

My Journey to a Great Meeting

April 04, 2011
Imagine you go for a meeting and you find yourself in the presence of a group of people including an author whose book will very soon be in the hands of one million people, a web guru who is helping thousands of people to market their businesses online, a marketing genius whose business portfolio is about to reach ten million dollars, a black belt Karate instructor who is talking about another couple of properties he just acquired and who is an expert in financial fitness, a guy who is making tons of network connections in a heart beat and a sales expert who, by the end of this year would have delivered over 80 keynote speeches and presentations to sales executives. Wouldn't it be nice? Guess what? I have been part of such a group of people for the last five months . Every Sunday afternoon, this mastermind group meets for about one hour and half to talk about our goals and how we can help each other achieve them. This group is called GoalAchievers International founded by a great
3 comments
Read more