My Journey to my wedding Part 1 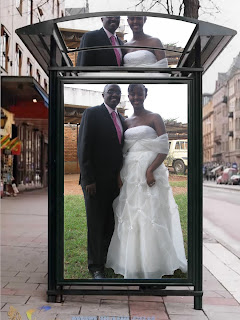 Are you surprised by the title of my blog? Didn't you read about my wedding before? Why then Part 1 instead of part 2?


This is the story before the story.


I remember the first week I returned to work after my wedding. They surprised me with two cakes (they know that I am always open to opportunities when it comes to food). They asked me to give a speech (even though I was speechless because of the cakes). I told them that I was as surprised as they were about my wedding because things went so fast. They all laughed; but it was true.


About a month later, everything seems to be back to usual; but not really. When I think about it, my journey to my wedding really started in late October 2009. I was on the phone with my coach at the time, Sandy . She has made a huge difference in my life. After a short conversation in which I told her my usual thing “everything is fine there is nothing to worry about” (what a lie!!), she finally “gave it to me”. She spoke straight from her heart and told me what she really thought about me. I won't tell you everything she told me (you will have to pay for that, and of course with a commission for Sandy), but she mentioned one thing.


This is what she said (I am paraphrasing): “I like everything about you, but you have to know that, as a single guy, no woman will like to be with you if you don't want to open your heart and say really how you feel. You have to accept to be vulnerable and to admit that sometimes you are down. You are a human being like all of us”.


My God she was so right!!! Throughout the entire conversation, the thing that got me the most was “no woman will like to be with you” (who wouldn't be terrified, especially when that comment comes from a lady?)

I had to change.


Fast forward. This is what happened a year later:


One day in October 2010, I was heading to Montreal to attend my best friend’s wedding. I was on double duty as the best man and master of ceremony. The six hour trip from Toronto to Montreal gave me a lot of time to think (luckily I wasn’t the driver).


During the trip, I thought about my relationships, or lack thereof. I had asked out a number of people (not many, I must confess) and all of them had politely declined and offered to remain friends. When you consistently get turned down and all you ever are is a friend, I think it's time for a check-up from the neck up.


Here is what I found out during my check-up. My vision of the “right” woman for me had become a checklist I used to measure everyone I met. Only if she had seven out of ten on my checklist could I envision a chance for us to be together. As for the three remaining criteria, I thought I’d have enough time to change and mould her into a ten out of ten. Did my method work? I will let you figure that out for yourselves.


By the time I arrived in Montreal, I realized that my approach was not working and decided to turn to God. My prayer went something like “dear Lord, now the relationship thing is in Your Hands. I don't know where she will be coming from, when, how and who. But whoever You will send me, I will love her the way she is without trying to change or judge her”. After that, I went and lived my life peacefully knowing that I had put my situation in good hands.


That was my prayer on October 10, 2010. Just twelve days after my prayer, I met somebody in a very mysterious way (I think I have heard that God works in mysterious ways). We became friends and only two months later we were… married. Yes, you got it right. I am now a married man and I have never been happier.


My coach Sandy was right. I had to accept to be vulnerable and to be willing to be heart broken. Luckily, it was not broken.


Am I a bad student? (it took me an entire year to find the love of my life after my conversation with my coach). I don't think so. All that I know is that I am a very happy man.


Moral of the story? Do you want to get married? Just take a trip to Montreal and you will have a prayer.