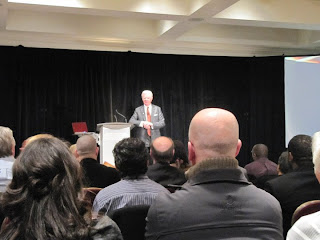 He is a hero of mine, I have studied his material for years, I had met him once and at that time he even signed one of the books he gave to me. But, spending three hours in an intimate setting, hearing him calling my name, him talking to me from a few feet away was just a dream come true.

Call me crazy, but I just believe that I will end up working with him. I don't know how or when this is going to happen, but I know I will. It is with the same belief that I know I will one day meet Michael Jordan and Nelson Mandela (being with Pathe'O few weeks ago made me feel I am not that far from it happening).

How did this happen? How did I end up meeting Bob Proctor? I just knew his phone number lol

Seriously. Last December when I returned from Africa, I knew my life would never be the same. I was married (just the thought of it makes me say “are you kidding me!!?”). I came back with a laser focus to make my life better. I knew I had to change something (less travelling?). I just wanted to give my wife the lifestyle that she deserves, but it required me to do things I had never done before.

So, I decided to look for opportunities to improve what I was doing and also to add new opportunities that were not there before. I started looking around and the first thought that came to me was my friend Dom. I remembered him telling me that he was part of something special. He did not tell me what, but I finally went to him and said: show me what you're doing. He did, and he also told me that Bob Proctor would be speaking in February for his organization, if I buy the ticket I would get a chance to meet him. I bought the VIP ticket of course and from that moment I started counting down the days.

I am glad I made that decision in December. Just a few days ago, I was invited to be part of a group of panelists to talk about Black romance in the 21st Century (I think I am qualified to do that lol). What a group of people! I found myself with authors (one has published 40 books !!!!!), movie producers, journalists, poets, movers and shakers in our community. Just a little blog that I started a few months ago is now opening doors for me in new arenas that I never thought I would be in. Now I am chatting with Bob Proctor. Are you serious!!!??

At the end of the meeting, I went over to Bob Proctor for his autograph. I had in my hand a book that he recommended in one of his programmes. It is “The Science of Getting Rich” by Wallace D. Wattles (call me crazy, but any book that Bob recommends , I read). Anyway, I asked him to sign me an autograph on the first page of that book, and he looked at me and said: “Read the first page of chapter seven of this book. It talks about gratitude. Whenever you feel stuck, just thank God for the life that He gave you and the problems you have will just disappear .”

Mind you, I have read the book ten times before. But when Bob told me to read chapter seven, what do you think I did? You're right. I have been reading that chapter over and over again. Wow! It is like I had never read that book before! It is simply humbling. This little boy from Ngagara and Mutanga Sud is now Bob Proctor's friend (that is the new title that I just gave to myself). It's just crazy.


Moral of the story? Do you want to meet Bob Proctor? Just get married and you will be talking about romance in the 21st Century