My Journey to my meeting with Pathe'O 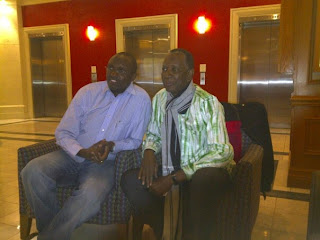 It is a Saturday night, I am heading to a fashion show in Toronto to promote my work. As I am about to finish getting my stuff ready, a guy comes with flyers promoting his own event happening three weeks from then. I know the guy, but he doesn't know me. I even know that he is the guest performer for our Black History Month event that we are organizing.

As he passes me by, I just say hi (that is my marketing strategy). He says hello back and I tell him that I have a radio show that can promote his event (now I become interesting!). We exchange our numbers and we agree to meet. Three days later, he is the guest of my show. As I am closing the interview, I inform him that I will be the Master of Ceremonies at the Black History Month event scheduled for the end of the month (now that you know, you have no excuse for you not to be there and to get my autograph). He tells me that he is looking for a Master of Ceremonies at his up coming event, an African fashion show whose main attraction will be the one and only Pathe'O. I said yes bien entendu, as we say in French.

I did not want to look stupid and say I did not know who Pathe'O was (that was the first time I heard about him), so I went on his website. Oh boy! This guy had designed clothes for a dozen of head of states, multiple African superstars and he is the official designer for Nelson Mandela. I was shocked twice. First, how come I did not know this guy and second, how come this guy did not know me lol. (I am the only superstar not wearing his stuff!!).

Long story short, I ended up spending two hours with him on Friday in a meeting: a one on one conversation with him on Saturday, and to top it all off, a two hour head to head meeting with him on Sunday during which he gave me an exclusive interview for my upcoming radio show! What a man of wisdom! He is knowledgeable, he is funny and he is so humble (he didn't even want to come on stage on Saturday when I invited him to speak to the audience who came to admire his out of this world fashion creations).

Of course I asked him tons of questions including how he met Nelson Mandela. He shared with me many funny stories that I won't mention here, unless you pay me a lot of money. During my interview, I asked him if he had any advice he could give to young dreamers out there who would like to have his kind of success. He just said: “Be willing to work hard and for as long as it takes”. He told me that it took him fifteen years of hard work before he could open his first store. Now his stores are all over Africa, Europe and North America. I felt privileged to be in the presence of greatness.

1990: Mandela is released from prison

Mandela visits France for the first time and is asked where he gets his shirts; he mentions Pathe'O

After Mandela mentioned Pathe'O's name, his phone explodes with calls from all over the world and his life will never be the same

2011: Pathe'O meets the Journeyman for the first time and the rest is history lol


Why did I mention all these events? Very simple. When we are pursuing our dreams, we will meet the right people at the right time to put us where we are supposed to be. Pathe'O was successful before he met Mandela, but after his meeting with him, his business went to the roof and now he is a legend. I was very successful before I met Pathe'O and then....I am just watching the Grammy Awards...(but who knows)

Moral of the story? Do you want to meet a legend? Just show up at a fashion show and you will love the MC. Hopefully, it will be ME.